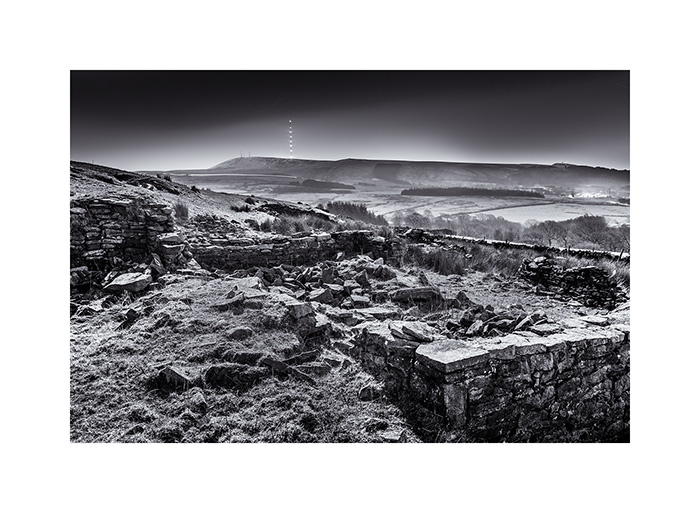 Several weeks ago I visited Old Rachels, a tumbledown ruin of a farmstead in the depths of Anglezarke Moor. As I embark on another long term project I wanted to feel my way ahead and dip my toes into the ancestry of the place.

Last night I spent a few dark hours with another old ruin, this time working under the gaze of a waxing moon who’s silver light cast sharp shadows on the ancient stones in front of my camera. Peewet Hall, formerly Snapes, was the subject of a compulsory purchase order between 1902 and 1905 and was inhabited by Jennet Morris who was probably an ancestor of mine.

The project ‘Homestead’ is focused on the Anglezarke clearances, a little known event in Lancashire history when the then water board removed inhabitants from their inherited land in order to provide clean drinking water for the burgeoning city of Liverpool. To this day the homes stand as stark testament to the dislocated occupants and I want to capture the feel of habitation out on the raw, wild moorlands.

At this point I’m still feeling my way ahead, gently prodding and poking the old places to see what awakens for my camera.

Last night, I was alone with this place that hunkers not fifteen minutes from the roadside. My exposures were necessarily long, but not as long as they could have been. A bright moon and a clear sky lit the scene. Fifteen minutes was sufficient time for an image to form on my sensor. This is one of the shots, with a discreet purple blue hue added to bring the night back.

I took half a dozen shots over a period of a couple of hours and felt oddly at home with the moorlands, even in the dark. This bodes well for the future of the project as I suspect I need to sleep with the places to find the shots I’m looking for.

Apologies to the night time jogger who gasped in terror when he caught a glimpse of a lone figure stood stock still by the ruins!