This photography project started almost by accident. I didn't really intend to spend so much time stalking through the dawn mists in my local countryside. It just kind of happened.

I went for an early morning wander as I'm prone to do, however on this particular March day I encountered a small herd of roe deer. They are quite common in the countryside around where we live and I'm very accustomed to seeing them. In fact I can practically guarantee a meeting if I put a bit of effort into my outdoor practice time.

And I've grabbed the occasional photo too. Usually from the fence at the bottom of our garden, or in reply to a chance encounter deep in a woodland when I just happen to have my camera with me. Usually the Canon 100 - 400 is the inspiration for any such shots although I've successfully taken images with my 24 -70 on occasion. Early mornings are best for that.

In fact early mornings are best for any deer activity as they do seem less flighty. The  young buck above is a case in point. He'll sometimes just stand and stare at me for what seems like minutes, but it's probably just moments.

This is the shot that started it all.

Nothing special, just a record shot of the small herd caught on my Olympus Pen F with the usual 17mm prime lens. Do you see the big buck in the centre? Lying down to the right of the gnarly oak? I met him the morning before in a secret place I call Devils Bit Meadow. He was with eight does(female roe deer) and a young buck who's presence he seemed to tolerate.

This big buck had triple tines on his antlers which I've not noticed before on a roe deer. He stood and gazed at me until his herd had safely traversed a small stream and climbed a steep slope to an open field. Once they'd reached the top he shook said antlers in my direction and quite nonchalantly trotted after them.

At this point I decided to see if I could get some decent shots of them and began to trail them and explore their regular haunts. It didn't take long, they are creatures of habit, fortunately. After three or four days I began in earnest, taking my 5Dsr out paired with my trusty 100 - 400 and 1.4x matched multiplier. The light was always going to be challenging at this time of day so I use my Manfrotto monopod with an all too heavy Gitzo ball head. I must replace that with a lighter alternative before long.

It soon became apparent that my shiny white Canon lens was doing me no favours so I hacked my camouflage bandana that I covered my grey hair with and stitched it into a lens sleeve. My grey pony tail now gets hidden into my hat! 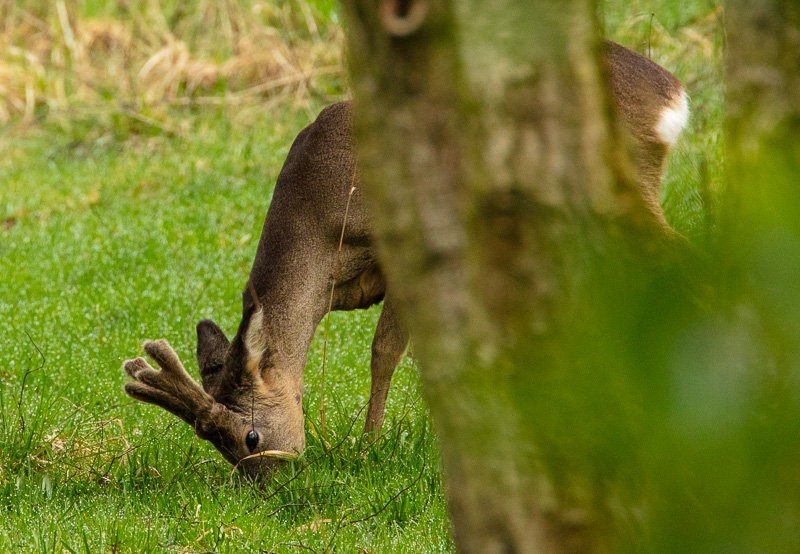 This was a defining moment for me

Just before dawn I slowly stalked around a corner having crossed a river and met the young buck busy foraging right in front of me. I think the babble of the river disguised my approach and enabled me to catch several shots before he wandered off into the blackthorn thicket.

I don't think he ever knew I was there.

If you're interested this is 1600iso shot at 1/125th with the lens and multiplier combo giving me 520mm, so Lightroom says.

This is the young buck, two tines to his antlers.

Following on from this shot I managed to get an even better picture of him as he came closer to nibble on the budding bramble. 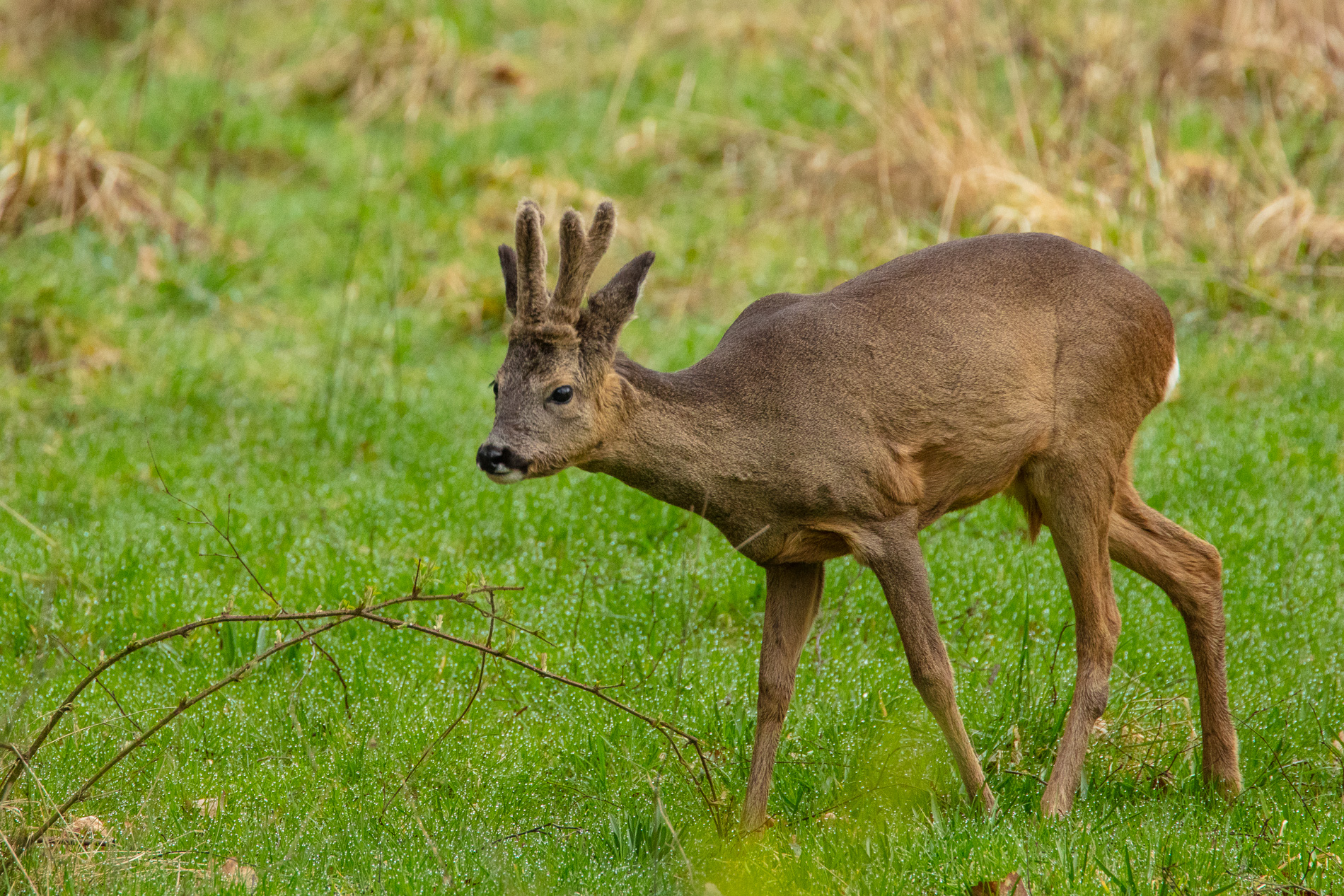 I've never been so close to a roe deer in my life and it was quite a rush believe me!

I could see every detail of him, even the white dawn sky reflecting back from his dark eyes.

His antlers still in velvet ready for shredding on the rough bark of the old trees.

I held my breath and managed to catch a good number of exposures despite the slow shutter speed enforced upon me.

Manual exposure helped me get consistent results in the dew drenched meadow.

I followed him with my long lens as he crossed Devil's Bit Meadow to rejoin the big buck who, unknown to me, had been watching me from a nearby bank. Ever conscious of the safety of the herd the big buck, three tines, waited until two tines had got to the thicket before following on, keeping a close eye on me all the while.

After they'd left, and I'd let my guard down, a doe appeared. She was onto me right away. Alert and tense she studied me for a while as if trying to decide if I was a threat before making a slow retreat into the budding silver birches. 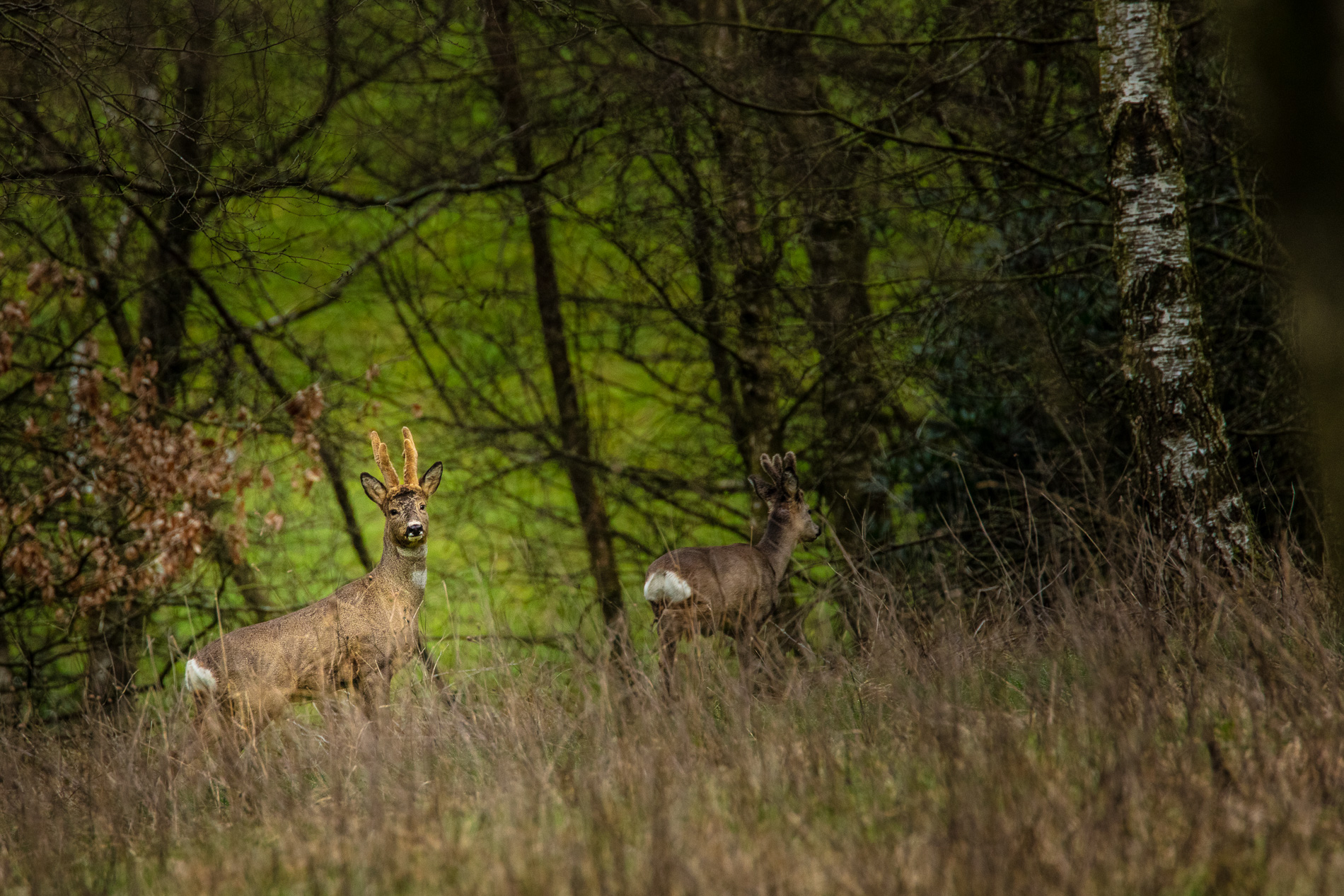 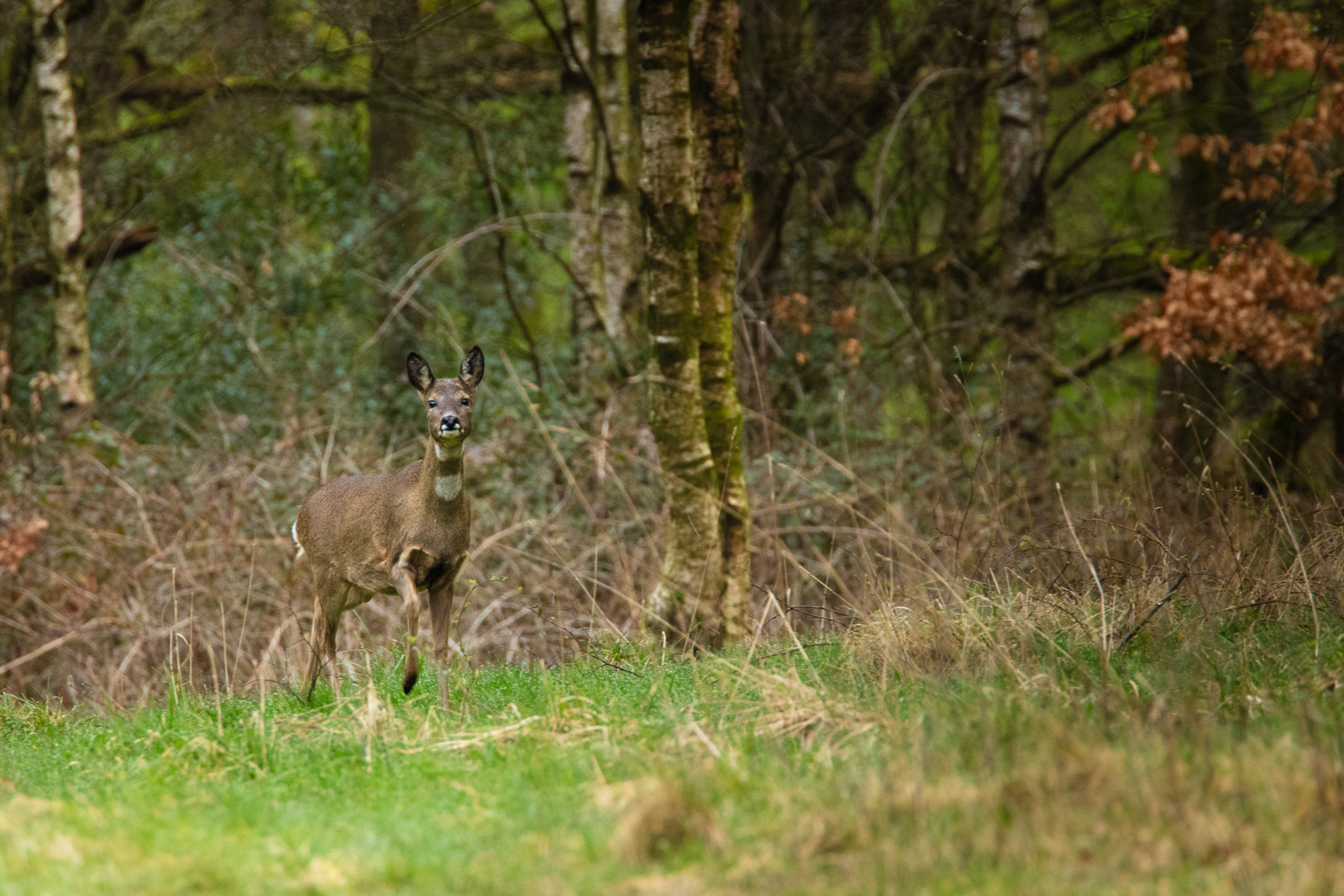 I was hooked! There was a story developing here. It was obvious there was going to be tensions arising with two males attached to the one herd and I got to witness that the very next morning when an even earlier start enabled me to witness a battle between the two guys.

It's not the time for rutting yet, or mating, but that doesn't seem to deter these from putting on a real show.

The next day the weather was closing in but I found the group in the field above Devil's Bit Meadow. The landscape wouldn't allow a close approach so I swapped my 1.4x multiplier for a 2x and hunched behind a small oak alongside a dry stone wall.

The two bucks were having a bit of a moment and I managed to catch it despite the low light levels.Three tines had the youngster by the neck as they tussled for a couple of minutes in the shady part of the field. 6400 iso gave me 125th of a second which was a bit of a push with the 400mm plus the x2! Thank goodness for the monopod.

The sequence of shots below are crops of about 20% of the full frame. One of the benefits of the massive sensor of the 5Dsr. 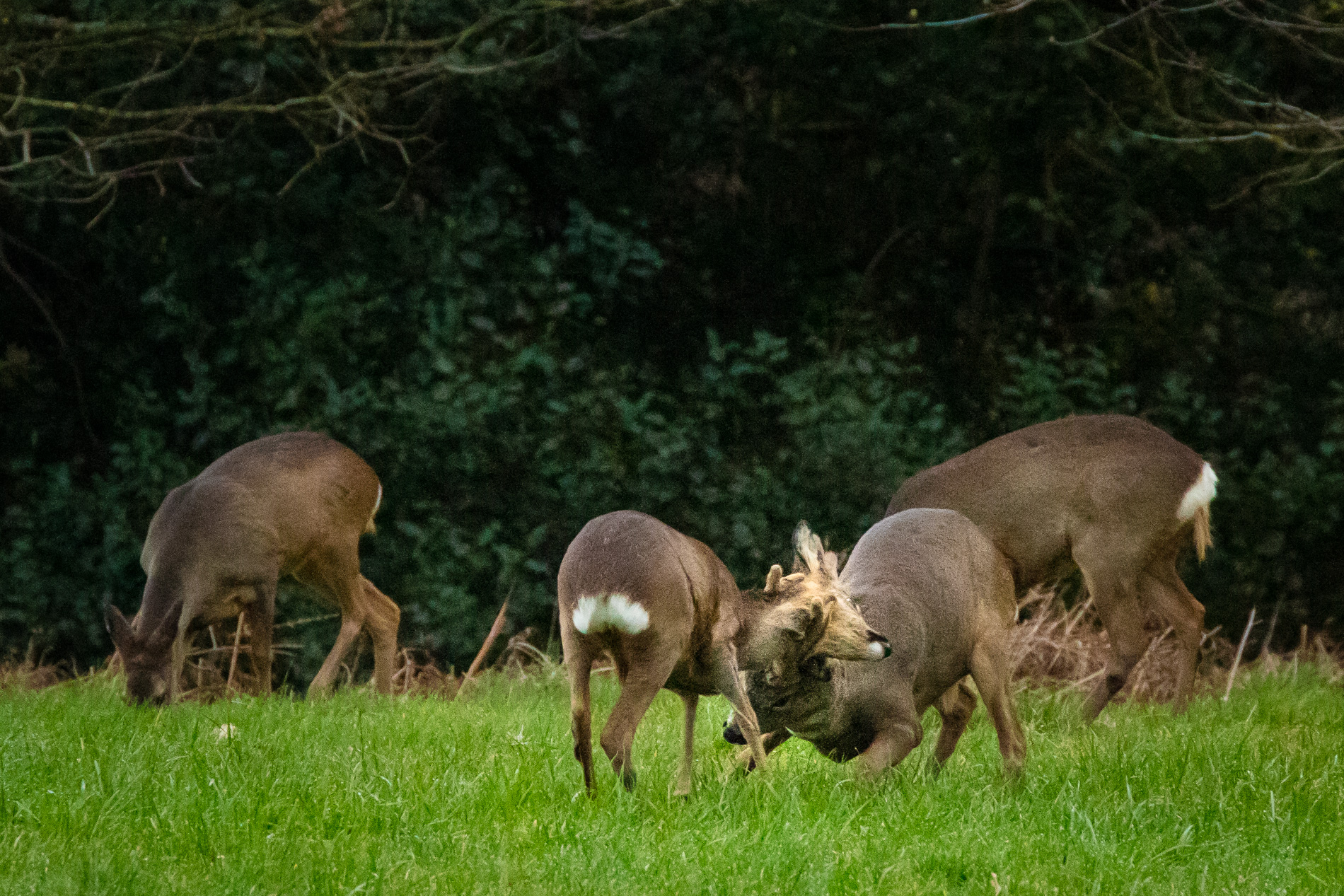 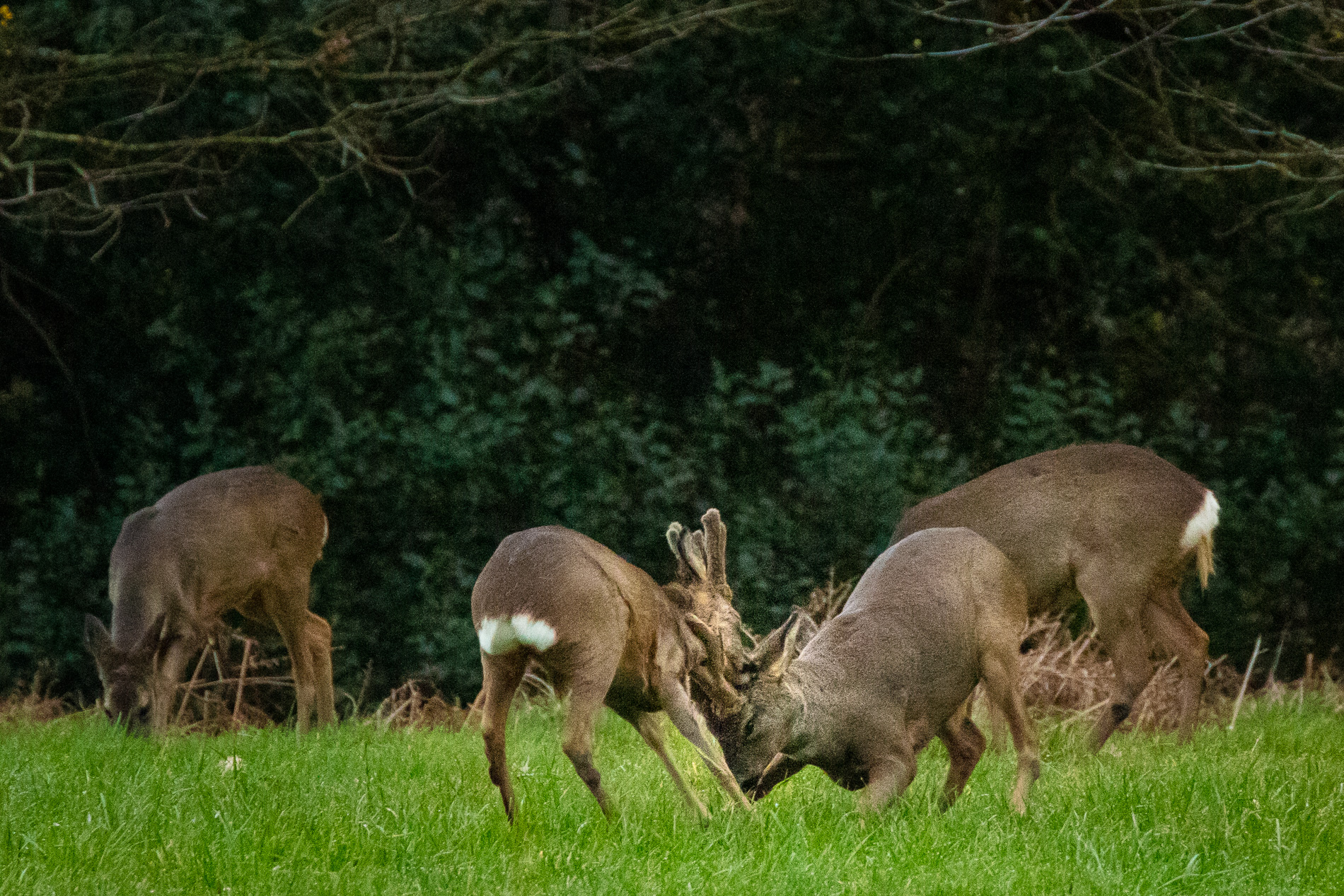 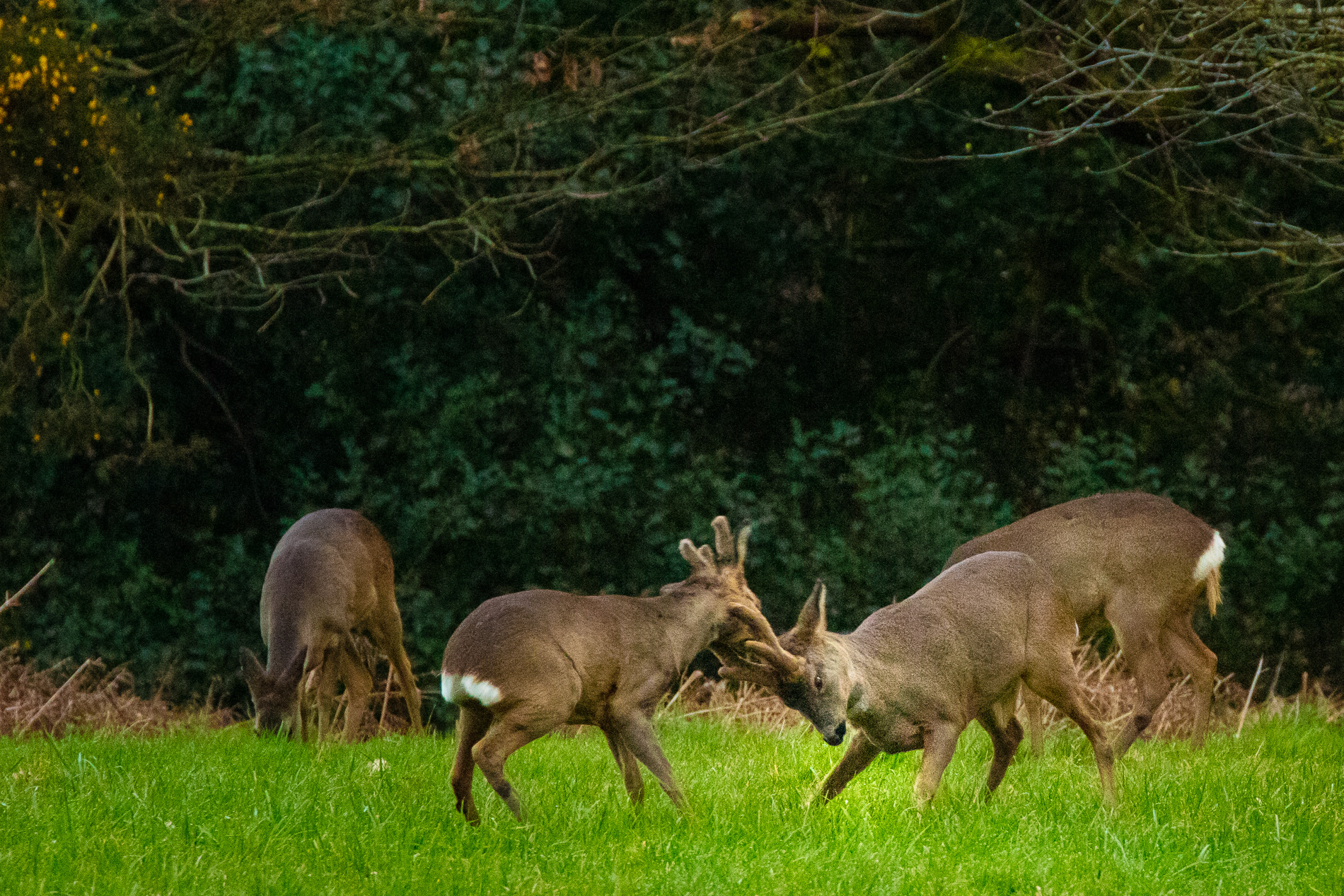 I had to take a break for a couple of days at this point and was keen to get back to see what was happening with the herd. There seemed to be some splintering of the group happening and I noticed that a couple of the does were becoming more solitary. Perhaps they were preparing to drop their fawns. It's the right time of year and they were particularly fat.

On my return I followed the herd for a couple of days but couldn't get any worthwhile shots. My assumptions were right, a couple of females at least had left the group. I located their preferred places for future reference. However I didn't see three tines.

This worried me. The day before I had a run in with a couple of deer stalkers who had shot a doe and were busy butchering her carcass when I disturbed them. Although they appeared to have all the relevant permissions and were approaching the hunt in a respectful way it did leave me uneasy.

I decided to follow the deer trails deep into a wooded gorge to see if I could find him, but failed.

This is a wood where there are no human footprints. It's hard to get into and appears to be the realm of the wild. The deer trail led right into the depths of this wooded gorge but there was still no sign of the big male, three tines.

I was getting concerned. What if he'd been taken too?

The next few days were concerning as there was no sign of him. I did manage to get several more shots of the does in the woods though.

This is a wood where there are no human footprints. It's hard to get into and appears to be the realm of the wild. The deer trail led right into the depths of this wooded gorge but there was still no sign of the big male, three tines.

I was getting concerned. What if he'd been taken too?

The next few days were concerning as there was no sign of him. I did manage to get several more shots of the does in the woods though. 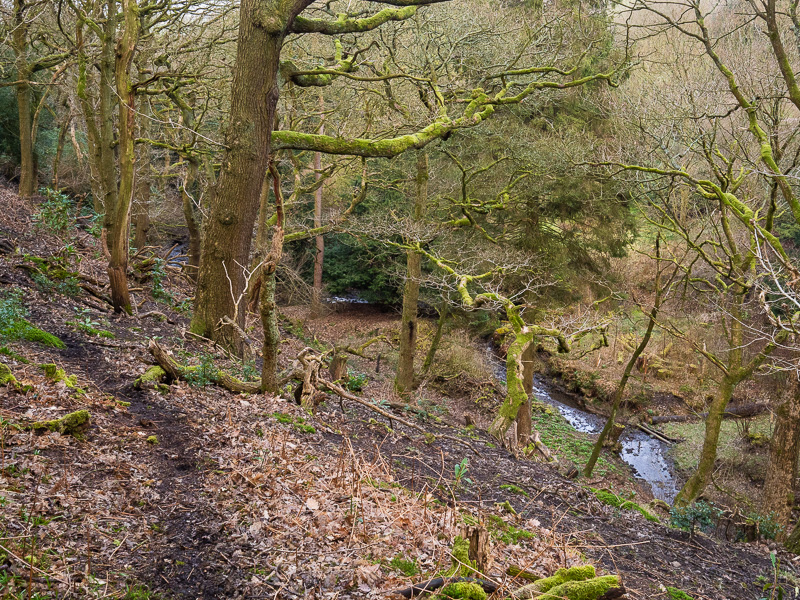 The young buck soon took advantage of three tines absence and set himself up with a splinter group of three does.

He began to frequent an area to the west of the main herds pad and paid particular attention to one doe. I watched them over a few days to see what was going on and got some interesting shots, one of which is the best deer shot I've ever taken.

Amongst the carnal happenings I witnessed some real tenderness between the couple which took me by surprise. 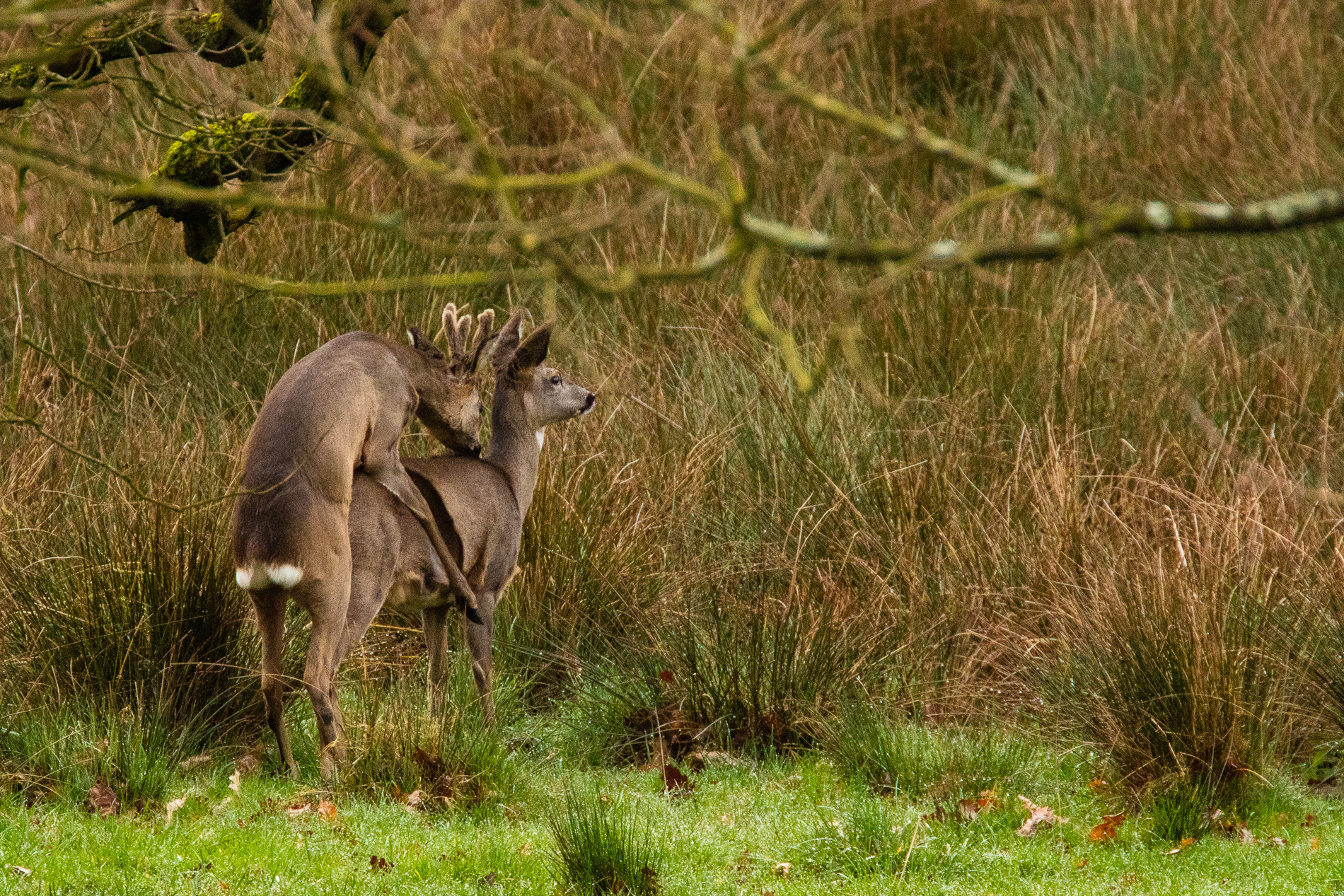 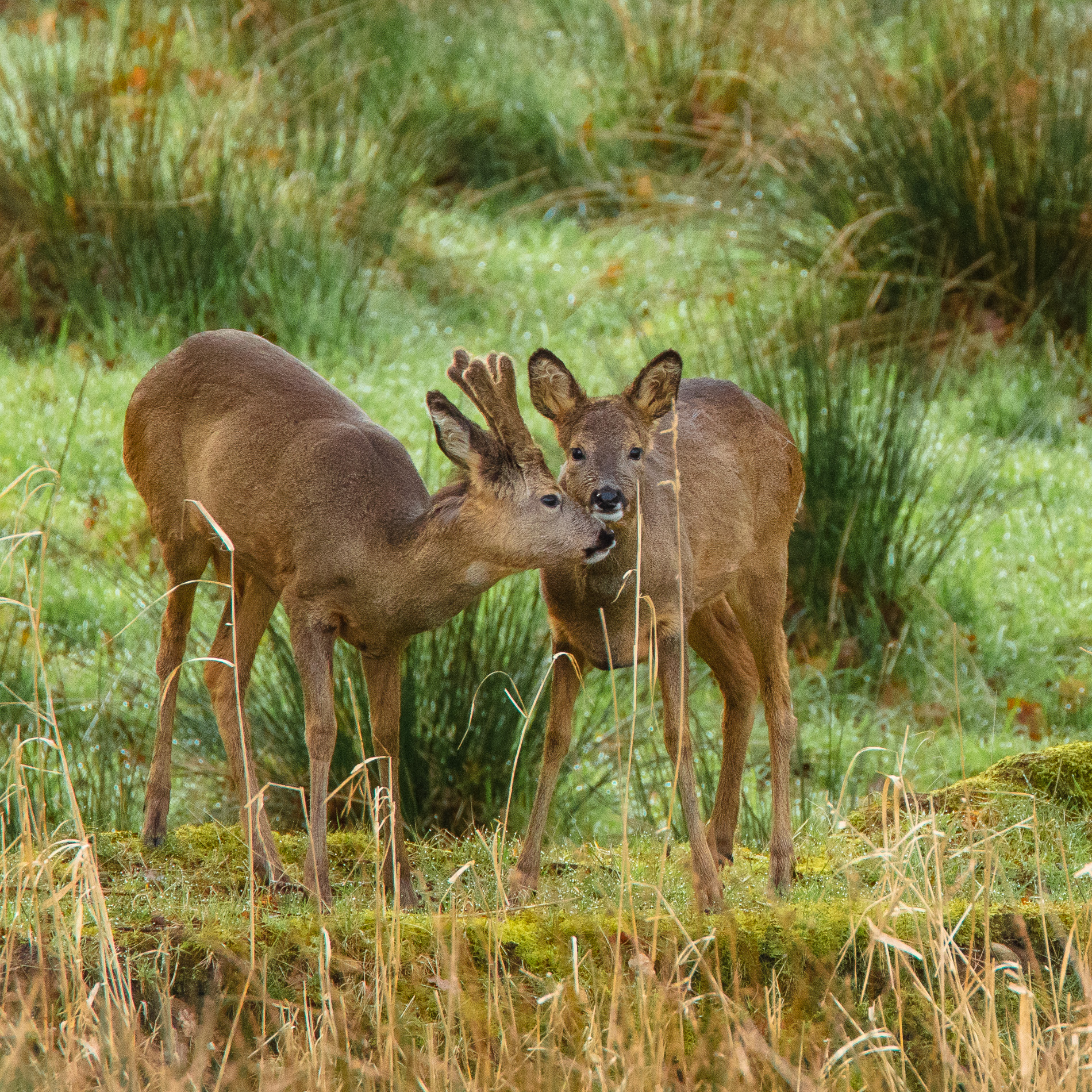 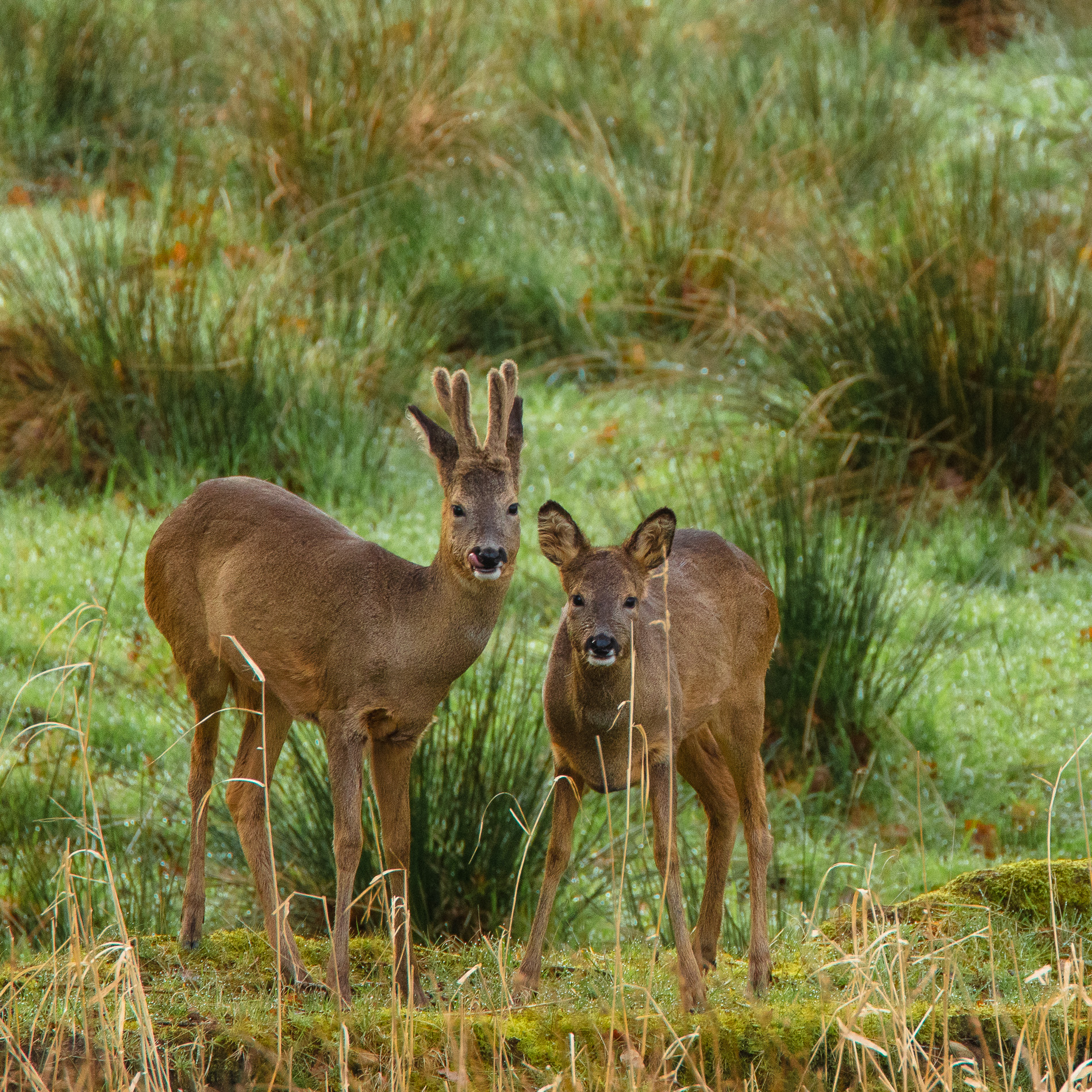 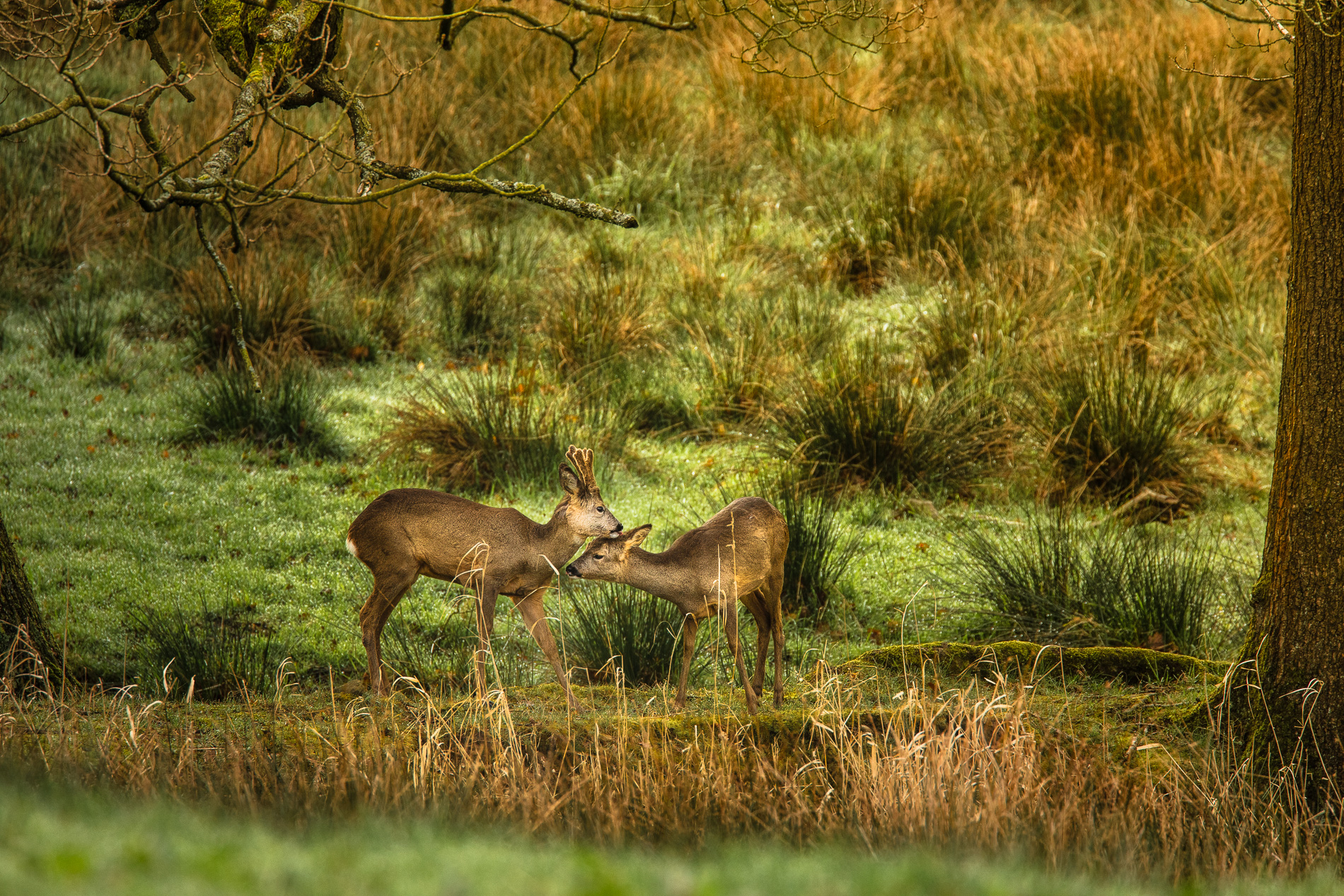 The day after I caught these shots I found him. He was stood in a meadow of blond grasses sported a pair of newly stripped antlers. Perhaps that's why he disappeared for a while, I'm not sure. However he does look more formidable now without the soft velvety covering!

Maybe two tines will give him a run for his money come the rut in early autumn.

I hope to be there to capture it!

To continue this photo project I'm going to press on collecting my images without giving too much thought to the final treatment. However I can already say that I'm leaning towards monochrome for the main body of work. Perhaps this will be supplemented by a smaller study in full colour. I'll see.

Here's the three tines with his clean antlers treated to a Lightroom split tone of orangey yellow highlights and yellowy orange shadows. Again at 1600 iso and 1/200th. 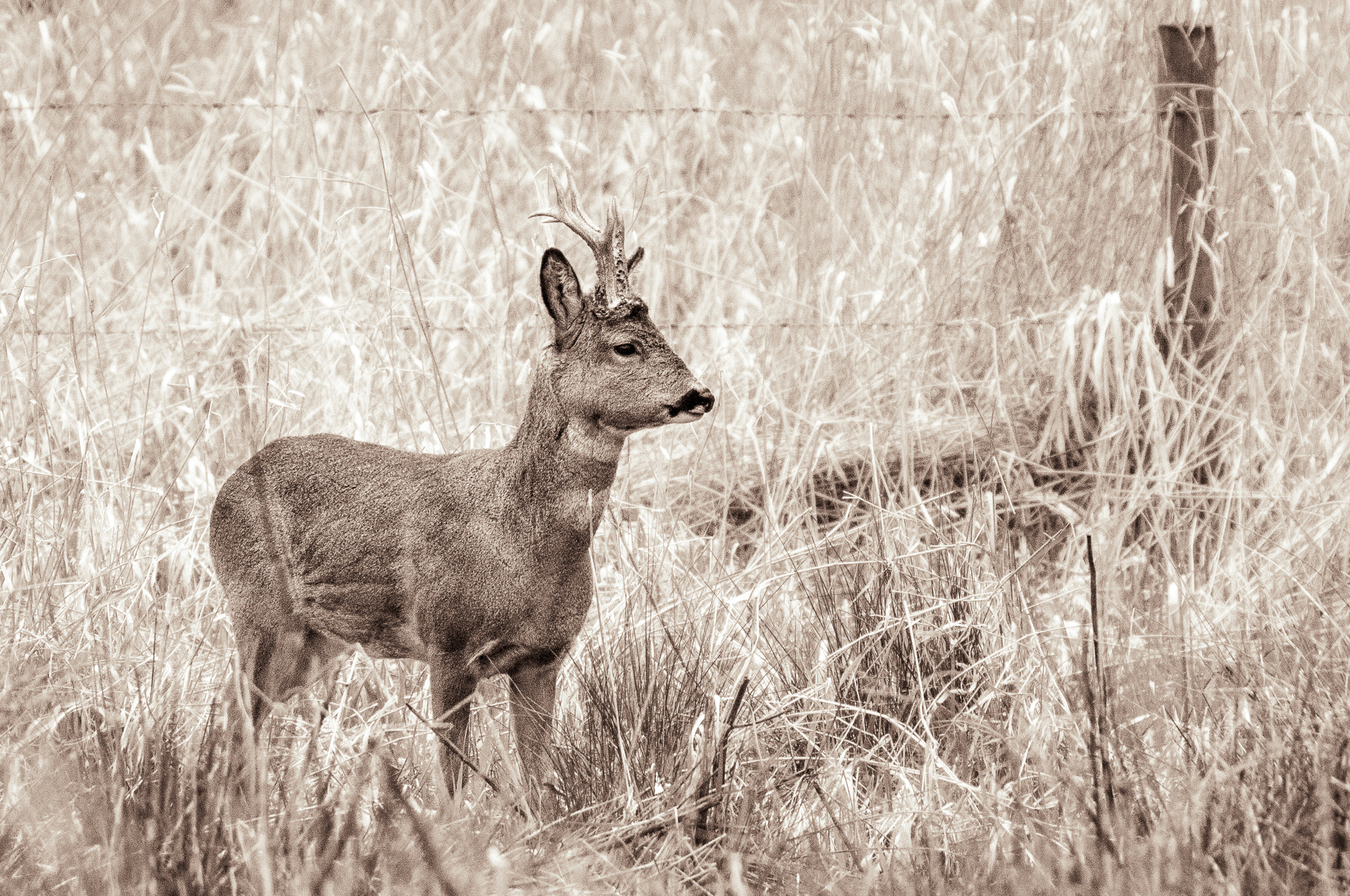 A couple of does appear to be preparing to give birth now so I'm going to give them some space.

I'll be back in a few days to see what's happening but won't stalk too close even though they seem to be less wary of me now.

The deer quickly bolt into the woodland depths as soon as anyone approaches, apart from me. They often run past me to seek shelter. Here's a doe heavy with young escaping from a dog walker who's perhaps two hundred yards away and unaware of the deer. 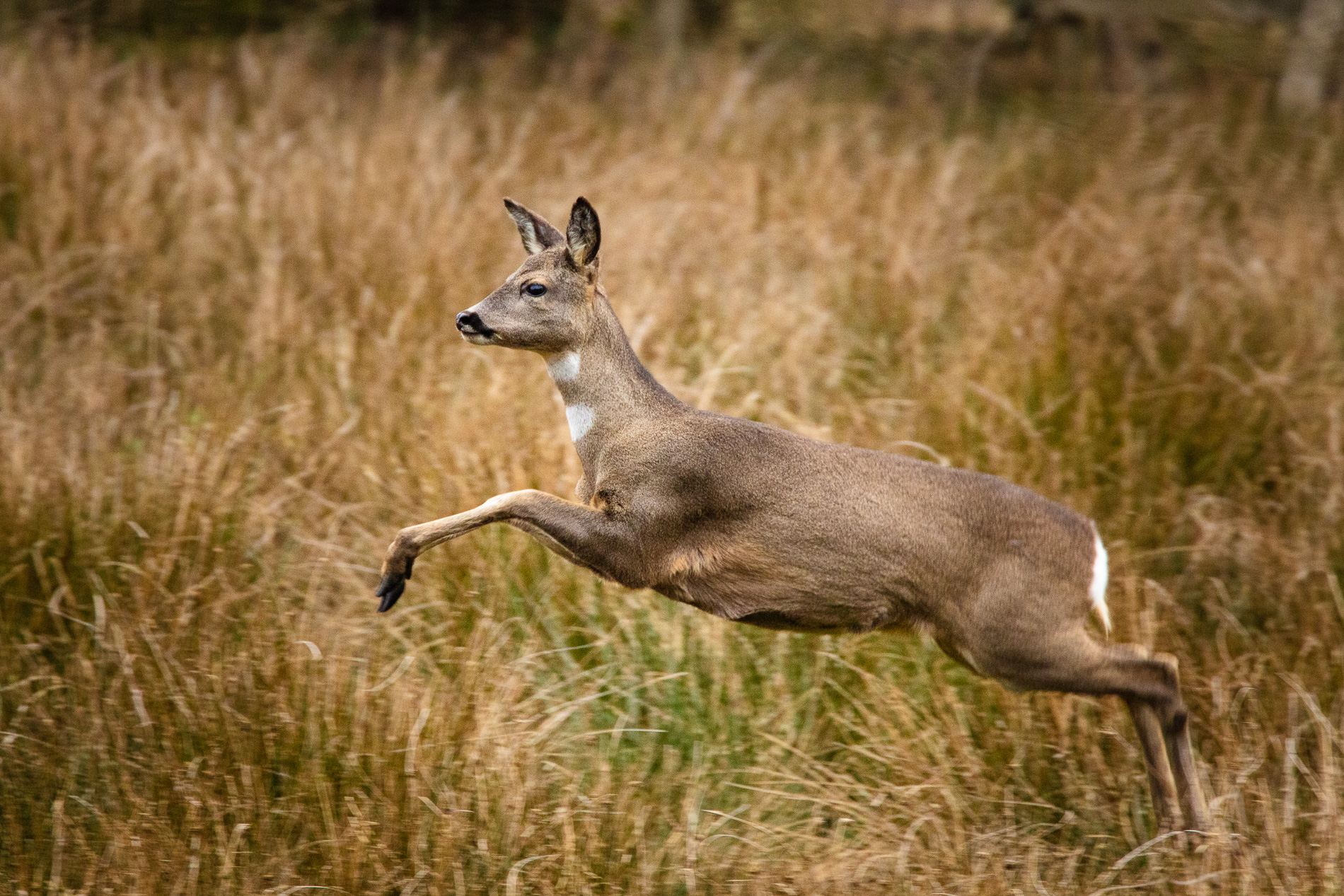 Occasionally this deer will stand and bark at me, sometimes making the hair stand up on the back of my neck when she's close. It's such a wild noise, every bit as evocative as the wolf howl and the fox scream to those who frequent our misty dawn woodlands.

If you've never heard the bark of a roe deer click on the video below. The quality isn't that good as I didn't have my kit set up for video. It's just a lucky grab of the atmosphere. 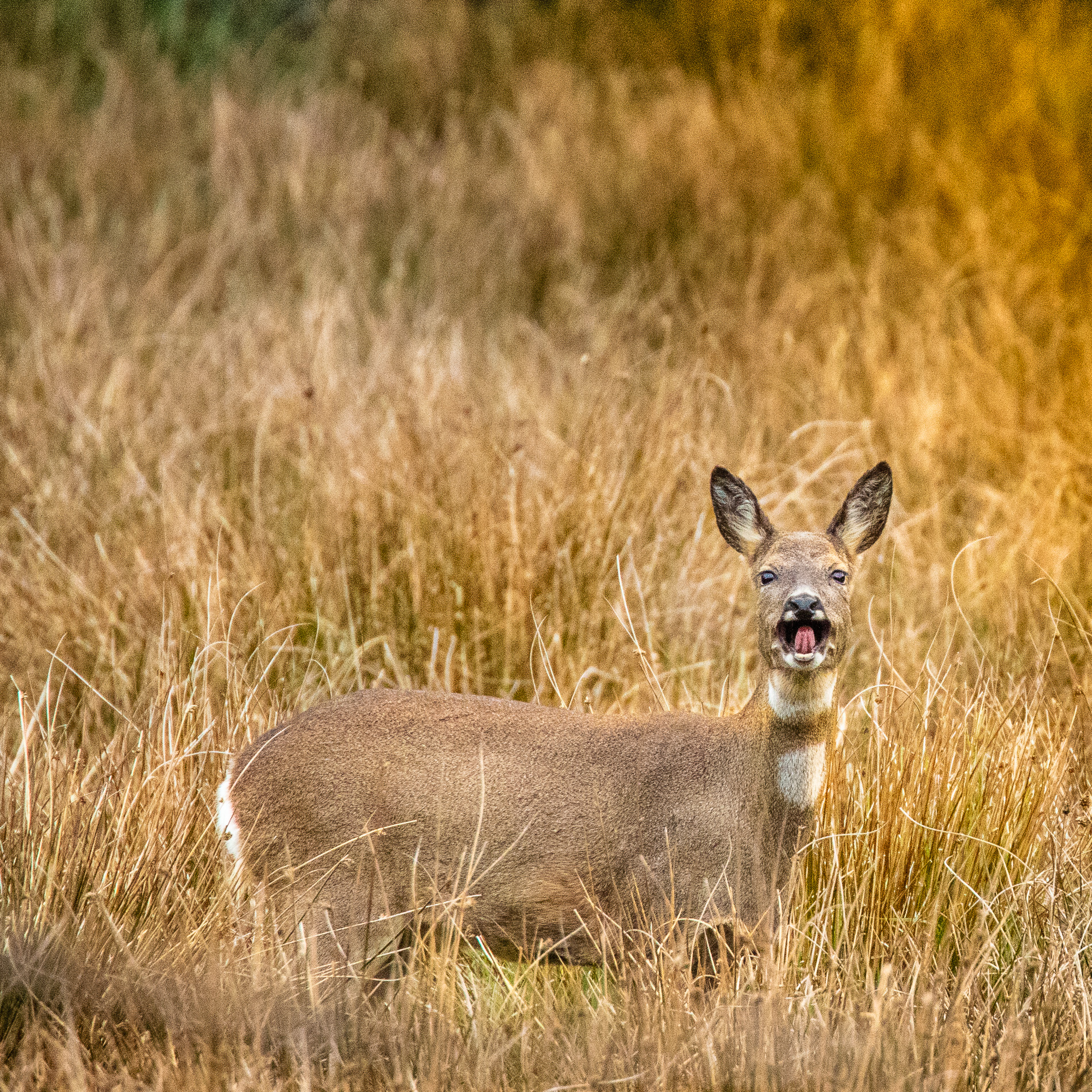 Where am I going to go with this project?

At the moment I'm not really sure. It's something of an on spec, ad hoc kind of thing. I'm going to continue working with the deer and will aim to get shots of the young and of course the rut.

There's lots of 'year in the life of' kind of series already out there so I'm keen not to add more to that. I'm hoping for something a bit different.

What aspect of the relationship of the deer with me, the countryside or whatever do I want to convey? What's the message of this? The mission?

It'll come to me at some point. but for now I'm beginning to play with different processing styes and quite drawn to warm monochromes. It's not decided at all yet though, so we'll have to wait and see what the final outcome is.

I am thinking a free ebook and a hard copy limited edition photo book.